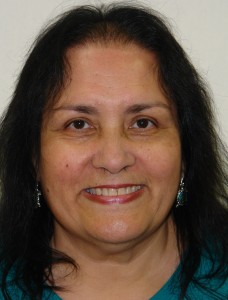 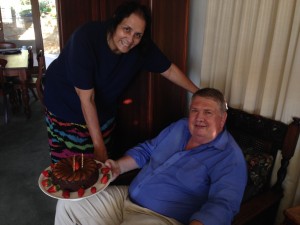 Lenore Dembski Paperbark Woman was born in Darwin, and with the exception of about four years in the early eighties, has lived here all her life. Lenore is Aboriginal and has been married for 47 years to Andrew Dembski. Lenore’s family name is Calma. Lenore has now been sewing for herself, her family and other people for over 50 years.

Lenore had a retail outlet in Darwin between 1997 and 2004 where she retailed her clothes and those from other designers and a large range of Aboriginal and Torres Strait Islander designed materials, patchwork pieces and home ware items.

Currently Lenore retails products through her Paperbark Woman Retail Outlet, through the internet, at Xmas markets and through other retailers.

Lenore designs under the names of “Lenore Dembski Paperbark Woman”, “Aunty Lenore” and “Oakman.” The Paperbark Woman comes from her Aboriginal tribe, the Kungarakan people, who are known as Paperbark People. Oakman, comes from her husband’s name. Dembski is Polish and means Oak tree. As well as designing and sewing the clothes herself, Lenore also sub-contracts the sewing to several local clothing manufacturers and individuals.

To a lot of locals, Lenore Dembski is known for her public service work in the Aboriginal employment and training area and her involvement with Aboriginal organisations. However, Lenore was actually a designer and sewer before she even thought about a career in the public service.

In the beginning, Lenore was taught to sew by her mother when she was about eight. To start with, she made doll clothes and costumes for plays put on by her sisters and friends. She began sewing for herself and her brother and sisters by the time she was twelve and started designing, drafting and sewing clothes for other people by the time she was thirteen. Lenore learnt some formal skills in sewing when she did “Sewing” during 1st year at Darwin High School. Between 15 and 18, Lenore modelled in a number of fashion parades and worked on weekends and school holidays for Woolworths selling all forms of clothing, materials and haberdashery and other items.

By her mid-teens, Lenore knew how to do knitting, crocheting, tatting, beadwork, tapestry, batik, tie dye, macrame, applique, patchwork and various other art and craft activities. When she was nineteen, Lenore purchased her first sewing machine – an Elna SU and a Contesser overlocker. Lenore attended a number of short courses put on by Elna in: applique and machine embroidery, men’s wear, swim wear, lingerie, and stretch materials. In Adelaide in 1982, Lenore did a 12 hour course in drafting to learn formal techniques in drafting.

Lenore formally started her sewing business in 1979 when she moved to Adelaide. She manufactured children’s clothes, women’s sportswear, lingerie, and curtains for several outlets, did bridal and after five wear for individuals and costumes for concerts. On returning to Darwin in 1984, Lenore sewed on a casual basis for family and friends and did a small amount of children’s wear for several outlets.